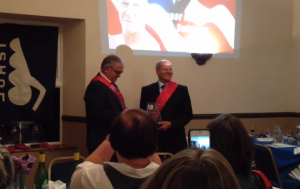 David is recognized by the International Swimming Marathon Hall Of Fame in Scotland, September, 2014.

David was one of the world’s most accomplished long-distance channel swimmers.

With more than a 35-year career, David completed numerous channel swims that no-one had ever done.

During his swims of up to 15 hours plus, he battled and defeated deadly whirlpools, thousands of jellyfish stings, hot water, cold water, nasty currents and highly uncooperative tides and weathers.

David’s goals were never been about speed, instead he decided to make his mark in swimming by being the first to complete channel swims around the world. So he shaped his swimming career not around speed or time, but rather longevity – years of swimming.

Beth was David’s  event manager and coach on every swim. Her skillful knowledge and attention to detail ensured the preparation, planning, and logistics went as expected.

“ He is known for his attempts to conquer waters that have previously been considered not swimmable, and becoming the first person to swim them.  No body of water is safe from his assaults.”
Dale Petranech, Secretary of the International Marathon Swimming Hall of Fame.
“He give me inspiration that is we are to be successful, we also are to be as disciplined as David is with this training”.
Djoko Wahyudi, Crew Member Sunda Strait, Surabaya, Java
“He was definitely motivational and inspirational. “
Tom Pizza, Great Leaders of Conejo Valley, Thousand Oaks, CA
David is one of the most inspiring people I’ve ever met in my life. He’s swum waterways in the world nobody else would have attempted, and made it….He believes he can achieve things, and in doing that, wants to inspire other to reach their goals.
Lynne Cox, World Class Channel Swimmer, California, USA
Here it is a week later and your message still means so much to those who attended your presentation…your inspiring life experience of health, wellness, overcoming adversity, perseverance, and positive thinking..
Cheryl Johnson, Human Resources Analyst, Thousand Oaks, California.
I understand the whole ocean and the need to be there. I know remote island people believe strongly in their spirits and Gods. They live off the land and sea.  David proved to them that he is part man, part fish, part strength and part spirit to endure the tremendous physical stress that he placed upon his own body. They watched him transform from a man to something that they believe can only be found in the spirit world. He instantly gained the respect of all. Stories about him will be handed down from father to son for generations to come.
Debbie Pillion, Attendee, Fountain View Presentation, Reseda, CA
More

Causes I believe in, volunteer and support

The Council has two purposes:

1 To distribute donated funds, via grants to local non-profit organizations.