There are no gold medals, no loving cups, and no elaborately inscribed certificates to laud David Yudovin’s all-time world record achievement on July 7.

Yudovin’s swim across the Tsugaru Channel between Japan’s largest islands of Hokkaido and Honchu is a personal victory.

“This is a real happening, not just a swim. It’s never been done before,” says Yudovin, after arriving home in Cambria last week.

The swimmer spent most of last summer trying, but typhoon-whipped weather conditions kept him on the Japanese beach, he reports.

“This time, I was determined to wait as long as it took to do it. There’s a lot of weather going through there,” the almost 39-year-old explains, and it took five weeks for conditions to be right. 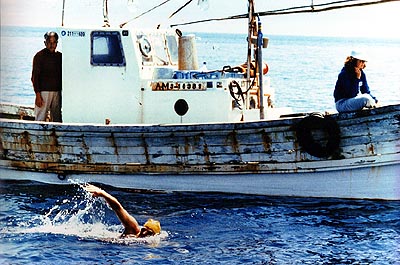 Departing from a remote fishing village at the north end of Hokkaido Island, he was piloted by a Japanese fisherman whose boat also held Yudovin’s wife, Beth, and his father, Sandy, also of Cambria.

In order to make the arrangements and train the fisherman in piloting, Yudovin had taught himself “some quick Japanese; enough to get by.”

It took him 11 hours, 55 minutes, and 40 seconds to traverse the 17-mile channel. He figures he swam a total of 26 miles, allowing for diversions caused by currents. With drifting, he believes he covered 40 miles of water.

“The story was broadcast all over Japan,” Yudovin says, “but we were only able to obtain one newspaper in the little village where we stayed with a Japanese family.

“It was a very big event there,” he continues. “People were moved to tears. For generations, their music and poetry has been about that channel. It holds great importance for them.”

The date of the swim was also significant to the Japanese.

“It was really a neat day, seven-seven,” Yudovin tells. “It’s a mythical holiday – a day in Japan for dreams to come true.”

According to myth, princes and princesses are stars, and they come together on July 7.

“I was completely ignorant of that fact” when choosing the day for the swim, he adds, telling how people write wishes on paper, and many brought their papers to him, wishing him luck.

Yudovin financed the entire cost of the venture and the practice sessions himself. The third-generation owner of a wholesale seafood brokerage in Los Angeles, he says he keeps business strictly separate from his swimming activities.

Those activities have included other major swimming achievements. In 1982, he swam from Anacapa Island to Oxnard in nine hours, 27 minutes, and in 1983, from Santa Cruz Island to Oxnard in 15 hours, 15 minutes. In 1984, he crossed from the Mexican island of North Coronado to the mainland in Tijuana in a record six and half hours.

“I was in perfect condition then,” he says.

In 1976, he swam from Catalina Island to the mainland, and in 1986, breasted the waves in the other direction. In 1985, it was the Straits of Gibralter in nine hours, 30 minutes.

Though they were all tough challenges, Yudovin remembers that his first swim from Anacapa Island, when he suffered cardiac arrest, was the most frightening crossing.

The cardiac arrest lasted for more than an hour, during which he was administered last rites at a hospital. He said his family was told even if he lived, he would be a vegetable. But the same condition that caused the cardiac arrest placed his body in a kind of suspended animation, and he revived with his faculties intact, he said.

To stay in condition for this crossing, Yudovin trained in the San Simeon cove all last winter, with a couple of trips to Hawaii where he could endure long swims in warmer water. For the San Simeon practice sessions, he wore a wetsuit and propelled a fast, 12-foot lifeguard paddle board.

Yudovin’s first encounter with the water was at Tacaloma Nursery School in West Los Angeles where he grew up. At the age of 7, he made the YMCA swim team and has been training for the 32 years since.