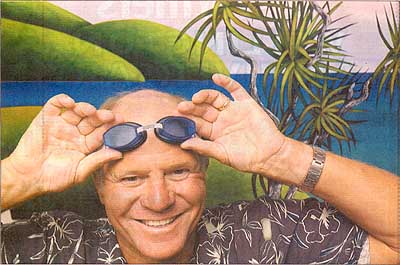 The 52-year-old American’s heart stopped beating during a marathon swim near Ventura, California, in 1978, when he was 27. He fought his way backto health and went on to rack up a list of conquests, which include becoming the first and only person to swim from Santa Cruz Island to the California coast in 1983, and the English Channel in 1996.

On Friday he added Cook Strait to his list, swimming it in 9 hours and 38 minutes.

His swim puts him in the record books for being the oldest person to make the crossing. The previous oldest swimmer was 42.

But there were times during the crossing when he thought he would have to give up – not to mention the jellyfish stings.

“When the wind came up, I thought if this gets any worse, I’m not going to be able to make it,” he said.

“Then I’d hit cold points and it would take the air out of me.”

Hypothermia was a real issue for Mr. Yudovin, for it was extreme cold that caused his heart attack 25 years ago.

Having spent more than a year preparing and training for his latest swim, Mr. Yudovin and his wife Beth, arrived in the Bay of Islands in November to gear up and moved down to Wellington this month.

“We rented a house in Wellington for three months, three days later we got the weather window we were looking for and the decision was made to go for it.”

“He was in an inflatable boat next to me the whole time.”

As to what comes next, Mr. Yudovin is unsure.

“This was the last swim on my wish-list.”

“It’s a very, very strenuous sport on the body. I have to start getting realistic about my body.”

For now he is content to bask in his latest triumph and enjoy New Zealand as a tourist before heading back to the United States to run his seafood businesses.